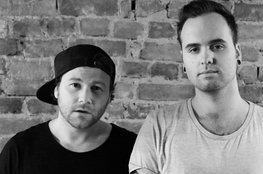 Once up on a time two nightlife-youngsters met up at a party in Oslo, and decided to make some thuggish music and happenings together. Influenced by the club scene, American gangster movies, sexy shaped asses and the deep house-hype, G-house was a granted genre from the start.

Alex (Alexander Solberg) has always been an up and coming, young electronic music producer that on early stages got recognized for his hit “My G Swing” (that got played around the world in DJ-sets by legendary Amine Edge & DANCE). Despite that he is in his early 20s, he already developed a personal sound and magical beats released on major labels abroad like CUFF, Nastyfunk, Cimelde, phD and so on.

Thomas (Thomas De Kinder) actually started out as an event planner in Oslo´s nightlife in the late 2000s, but suddenly found out that DJing was way more fun then arguing with bouncers about guest lists. The last years he has been playing at some of Euorpes hottest clubs and stages under the alias DJ Kinder.